TLDR: Monero, and in general cryptonote based cryptocurrencies, transaction unlock_time values were interpreted with local time, allowing a host of non-critical exploits targeting the integrity of the blockchain. The issue is patched as of monero version 0.17.0.0. No harm towards user funds was found related to the issue.

Next to containing code activating the new CLSAG signature algorithm, the v0.17.0.0 release of monero also contains a security patch. The patch was called “Deterministic Unlock Times” in the release notes. The reason for this new functionality was not provided before, which led to some speculation on its nature. It is now given both in this article and the HackerOne disclosure. This is the second article in my monero unlock time series. The first article is here.

When the unlock time is above 500’000’000, it is interpreted as Unix time in seconds rather than block height. Surprisingly these time-based unlock_times were not compared to the network or rather block time, but to the local time of the machine running the monero node. Using this local time is problematic. Nodes should use as much shared blockchain data as possible when verifying transactions, or concisely: Consensus rules must react to consensus variables. Since time varies from machine to machine, it is not a consensus variable.

I shared this issue with monero research lab regular contributor Isthmus (@Mitchellpkt0 on twitter) and we explored the following vulnerabilities. I do consider them serious enough to have warranted a report and some degree of secrecy, but I don’t believe them to be critical, nor particularly dangerous.

By consuming outputs locked with carefully chosen unlock_time values, it is possible to poll the local time of other nodes. The attacker can generate any number of transactions encumbered with a spread of unlock_time values, for example with an unlock_time 20 blocks per the expected block time into the future and then spread out over intervals of seconds. The attacker then creates transactions consuming these locked outputs and connects two nodes to the node she wants to spy on. She sends the transaction from one of the nodes to the node she wants to spy on and then checks if the other node receives the transaction. If the consumed unlock_time is invalid by the consensus rules for the attacker and the greater network, but valid for the surveilled node, the attacker will get the transaction relayed to his other node as well. This then indicates the local time on the surveilled node matching the time on the attacker’s transaction. Using a binary search methodology, the attacker can then pinpoint the node’s time within a precision of seconds.

If such a node is found with a different clock (running late or early), or if the attacker can manipulate a node’s local time through another channel, we identified two additional ways to exploit this unlock_time validation.

Assume a node has a clock running forward (having a higher Unix time). The attacker creates a transaction consuming at least one output with a high enough unlock_time such that it is invalid by the clocks of most nodes on the network, but valid for the node where the clock runs forward. If the attacker relays this transaction to the victim’s node, the node will validate it as a valid transaction. This is especially useful for the attacker in the context of mining. For example, if the victim’s node is a large mining pool, this can be used to make the pool expend work on a block that is not valid with the locked transaction included by the rules of the rest of the network. If the attacker is a mining pool herself, she can use this to increase her profit.

An attacker can continuously submit transactions consuming an unlock_time encumbered output with a value just later than the victim node’s clock, ensuring the node will never catch up to the tip of the network’s best chain. This could be used for a short term eclipse attack, even potentially allowing the attacker enough time to feed it a “slower” malicious chain. Once the node’s time has eventually surpassed the unlock_time, the node can accept the block containing the time-locked transaction from the best chain again. Since connections with peers are dropped if they feed ‘invalid’ blocks, there is no telling for how long exactly the attack could be sustained, because the node might first have to accept connections with its peers again. This form of eclipse attack could be used against an exchange (if the exchange node’s clock is wrong) to double spend.

Some Mitigating Factors and Data

To assess the risk of this happening without a further exploit enabling NTP time or machine time manipulation, I produced the following graph: 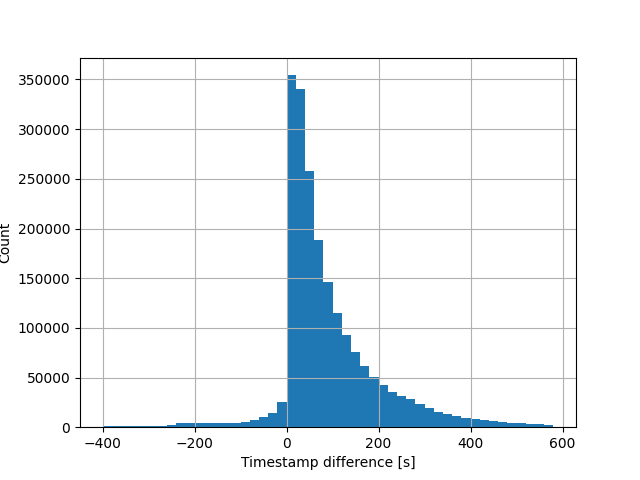 It shows the timestamp difference between two successive blocks. Negative time indicates at least one of the two blocks having a block timestamp differentiating from the actual time. Blocks produced in the past cannot appear after new blocks! We can use all these negative differences as a rough estimate, bar any real understanding of the statistical underpinning, for blocks produced by a machine with a significant time discrepancy. This amounts to about 2.6% of all produced blocks, which gives us a guestimate of vulnerable miners to the above exploit without further manipulation.

Following the discovery, we submitted a report to monero’s HackerOne outlining the above problems and containing a potential patch for the issue.

A similar problem used to exist in bitcoin’s nlocktime field. However, this problem was less serious at the time, since the nlocktime semantics are different compared to monero’s unlock_time (nlocktime's influence is on the finality of the transaction itself, not a later transaction), and since the last block’s timestamp was used instead of the local time. It was fixed through BIP113 and now uses the median timestamp of the past 11 blocks to determine if an unlock time is valid. The fix was also a required step for the deployment of the CSV and CLTV opcodes, which adopt a similar output locking mechanism to the one of monero’s unlock_time.

The newest version of monero contains a change in the consensus rules making the Unix time-based unlock_time dependent on the timestamp of previous blocks. The original patch was much inspired by how bitcoin handles its time-based unlock time values. It took the median block timestamp of the past 60 blocks and compared it to the unlock time value.

It aims to more accurately represent the current time.

The full contents and discussion are available on GitHub. These new validation rules were activated with the latest monero hardfork together with the CLSAG transaction signature and format validation.

Closing notes on the monero code

Interestingly the code already contained a function get_adjusted_time that just returned the local time of the system running monerod. It did have some ominous comments indicating this was not its intended form. The function has now been repurposed to calculate this actual “adjusted” time.

I found this vulnerability while reading through the TODO comments in the code. Monero inherited a largely uncommented source code from the original cryptonote developers. Particularly hazy areas are commented with either //TODO or //FIXME. I would strongly recommend other security researchers to take a tour through these. There are roughly 120 TODOs and 30 FIXMEs left, so there may be more to find.